Proof of concept vs. Prototype vs. Minimum Viable Product

This article will discuss these three options, explain them, and explore their viability and benefits for mobile app development. Let’s start with the introduction of these approaches.

A mobile app’s Proof of Concept, as abbreviated POC, is typically a smaller and internal validation project made by the app developers. The proof of concept mobile app development approach to product validation is all about exploring functionality and verifying a particular idea and its feasibility for development.

Using a POC (Proof of Concept) is one of the best solutions for sharing knowledge internally (within an organization) about a product’s core functionality and productivity. Decisions about usability and UX (user interface) are not considered for a POC because mapping the UX is very time-consuming, and UX design can also interfere with proving the product’s viability. A POC provides a definitive Yes or No answer that explains whether the concept is applicable or not. Even if the POC showcases that the proof of concept doesn’t properly work, developers can still find other solutions from the same starting point of the project.

Creating a POC is especially important if the concept does not exist in the app market or to distinguish the concept from competing products. Certain types of mobile apps already dominate the app market. For example, a messaging app. When developing a competitive app, you don’t need proof that your ideas are viable, but building a user base has a unique feature set to differentiate you from similar concepts that require POC.

The POC shows that the product concept can be implemented, but the mobile app prototype shows how it is implemented. There are countless ways to prototyping, but when developing a mobile app, prototypes usually start with a sketch or paper surface and evolve into an interactive mockup that resembles the final product. The purpose of the prototype is to communicate product design and navigation flow to maximize development efficiency. Prototyping is a valuable exercise for visualizing how your app works by showing the user flow and the design and layout. Of course, prototypes have bugs, but finding those bugs early in the project is one of the goals of the prototype.

Testing mobile products using the prototype is essential for user-centered design and development. Prototyping, a central part of the design thinking research process, uses rapid iterations to reach products that offer maximum user value. Often, the prototyping process reveals new ideas and confirms the best direction for development. Prototyping is a cyclical activity in which the product team continuously reviews and refines the product concept and returns to the beginning of the process until the concept meets business goals and user needs. Overall, this process helps identify and fix problems early in the project, where it is much more cost-effective to make changes.

Prototypes often affect MVPs, where the two work together to create a successful final product. MVP is the minimal format tested on the market for the entire product. This development approach allows you to see how your users react to your product before you waste a lot of money and resources building something that no one wants or needs. Prototypes solve problems early in development, but MVP’s iterative process identifies user problems when the product is tested on the market.

The risk of developing more (or less) than necessary is why it is so important to use MVP to validate product assumptions. It’s important to start with core features, learn how users react to them, build according to user feedback, and determine the right amount of features a product needs to attract and retain users. Over time, insights from MVPs define product roadmaps and guide app development. The

MVP is a product version that contains only the features needed to bring it to market. In the MVP process, you can see the following:

A proof of concept is a small project created to test whether a particular idea or theory about a product can be implemented. For example, if you’re not sure if you can build a feature, create a POC to test the feasibility of your idea. The development may seem like a waste of time, but POC saves money. Knowing if something works reduce the risk of failure. A POC is like a small piece of research that provides a green light to continue product development.

Like the POC, the main purpose of the prototype is to assist in product development decisions and reduce the number of errors. But that’s not the case. The POC provides a model of only one aspect of the product, while the prototype is a working model of multiple aspects. Development teams typically use prototyping to find bugs in the system. Prototyping tests product design, ease of use, and often functionality. You can’t do all of this using a proof of concept. This is due to its small size, and only one issue can be verified.

Both MVPs and prototypes are models of the system that the development team builds. But if the MVP itself feels like another product, the prototype is more blueprint. MVP is the smallest version of the final product and will be released soon. It should be simple and sophisticated, with no bugs or other issues. On the other hand, prototypes are created for debugging purposes and are often far from perfect. Unlike the

MVP prototypes are usually never on the market but are still in customers’ hands. The prototype’s main goal is testing, so the potential user is one of the users performing the task. Prototyping helps you understand how real people work with your product. The development team can receive customer feedback to change or create a new prototype. Generally, you need to create many prototypes with different scopes and content before the final release. Prototyping also helps you come up with new ideas for your product. Prototypes can be used to attract investors and later build a minimal viable product based on them.

An MVP is a product version with just enough features to stay executable. Building an MVP is to get the minimum version of the product to the market. That way, you can see if it’s worth anything. If so, you can start making money immediately with your first customer, an early adopter. With confidence and sufficient funding, you’re ready to add features to your MVP. Unlike the

MVP is created to test some minor technical assumptions before starting development as proof of concept. Suppose you’re unsure if the idea works. Create a POC instead of an MVP. The proof of concept is not visible to the user. It is intended for only a small portion of the system, not the entire system, and the POC is used only internally to clarify how to proceed with development. However, you can also consider setting up a POC to fund the seed stage. 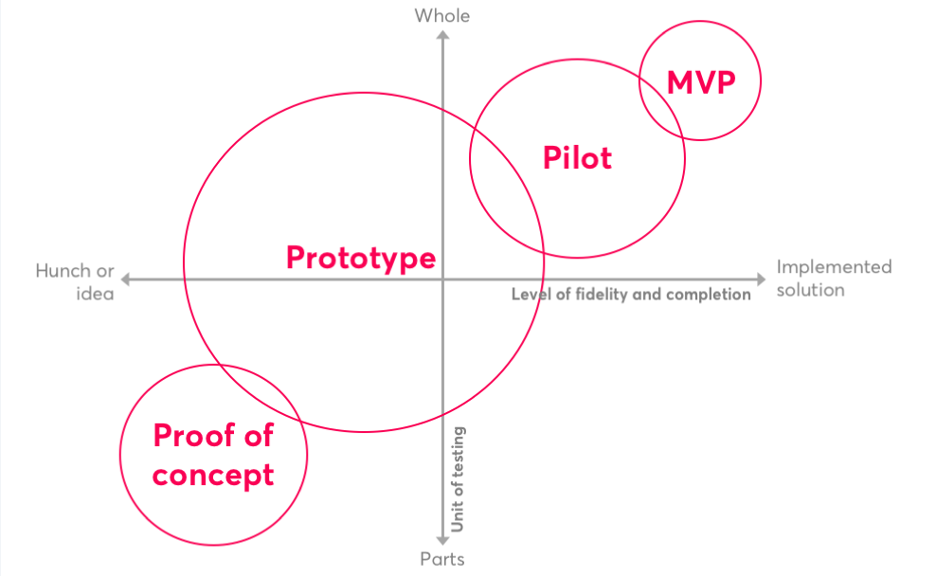 As mentioned above, mature products result from many years of development at a reasonable price. However, because these apps were created repeatedly, costs spread over time and often reinvest revenues from previous versions.

With the MVP, you can take the same approach and deliver the best value to your business in the shortest amount of time while minimizing costs. Providing immediate value is at the heart of the MVP release, allowing you to start investing more (and smarter) as you attract more users and collect more information to help guide your product.

How to choose the best approach?

Each project is different and requires a separate approach. However, disruptive or complex business ideas may need to go through all three development phases to ensure a cost-effective implementation. The transition from the POC to the prototype and MVP may also be necessary to invest resources only after thoroughly examining the idea and confirming that the product has the potential to gain a foothold in the market.

The exact approach to software development depends on the amount of data and resources available to get you started.

If you’re unsure if your idea is finalized, start by building a POC. Then create your prototype to test the overall look of your system. This prototype has the potential to be the minimum viable product that will be brought to market later. Then run some prototyping cycles again before the product finally hits the market.

Choose POC if your project is small and used internally to validate the feasibility of your idea and you are looking for initial funding. Create an MVP if you need to validate your product value assumptions and impress your customers. If you want to test your system and surprise investors, choose an interactive prototype.

However, remember an approach is just as good as the people implementing it. Hence, buckle up and work hard on your app development. Best of luck!

We use cookies on our website to give you the most relevant experience by remembering your preferences and repeat visits. By clicking “Accept All”, you consent to the use of ALL the cookies. However, you may visit "Cookie Settings" to provide a controlled consent.
Cookie SettingsAccept All
Manage consent

This website uses cookies to improve your experience while you navigate through the website. Out of these, the cookies that are categorized as necessary are stored on your browser as they are essential for the working of basic functionalities of the website. We also use third-party cookies that help us analyze and understand how you use this website. These cookies will be stored in your browser only with your consent. You also have the option to opt-out of these cookies. But opting out of some of these cookies may affect your browsing experience.
Necessary Always Enabled
Necessary cookies are absolutely essential for the website to function properly. These cookies ensure basic functionalities and security features of the website, anonymously.
Functional
Functional cookies help to perform certain functionalities like sharing the content of the website on social media platforms, collect feedbacks, and other third-party features.
Performance
Performance cookies are used to understand and analyze the key performance indexes of the website which helps in delivering a better user experience for the visitors.
Analytics
Analytical cookies are used to understand how visitors interact with the website. These cookies help provide information on metrics the number of visitors, bounce rate, traffic source, etc.
Advertisement
Advertisement cookies are used to provide visitors with relevant ads and marketing campaigns. These cookies track visitors across websites and collect information to provide customized ads.
Others
Other uncategorized cookies are those that are being analyzed and have not been classified into a category as yet.
SAVE & ACCEPT